skip to main | skip to sidebar

What Google Can Do 4 U

What's the best way to summarize the needs of mankind? The desires of the weak? The questions that we all want to ask?

Thankfully, Google has the ability to predict these questions for us. Google knows best.

What are the most used intros to questions? Well, don't worry, because I know. They are:

Haha, ok this is going to be so good. We're going to tackle these one at a time... Google shall do all the work for me, I will just type "How To" or "Who is" into the search bar and I will get a list of the top questions that begin with that phrase prompted to me. I will copy them down so we can, in turn, ponder them. And laugh. We are about to learn A LOT about society.

So what is it that we learned? I'm not certain. The only thing I'm certain of is this:

If you are trying to find the Erin Andrew's peep hole video and you realize that a.) you need to lose weight fast and b.) you don't know how to make a turkey, you must be able to whip out a cell phone with text capabilities to ask your friend what the proper hors d'ouevers(sp?) are and find the best background music for Christmas dinner. In the meantime, surf the net to catch up on all the latest Pop News, such as how to mine thorium or the story of Kim Zolciak's wig, and you do all of this why? To avoid being stuck alone in front of a mirror wondering if your vag smells. Only then will you begin to understand the mystery google. And why men have nipples. But seriously, is Wal-mart open on Christmas?
Posted by SilentK at 5:05 PM 2 comments:

Setup: In the summer of 2007 I spent a term in Kenya studying community wildlife management. With any foreign country comes a foreign culture, and in my part of Kenya this happened to be the nomadic Maasai, a culture in which cattle and children are the terms of wealth, and a culture I had always revered from home... I imagined them standing high over the plain, trailing the lions that stalked his herd. An image soon to be confirmed. 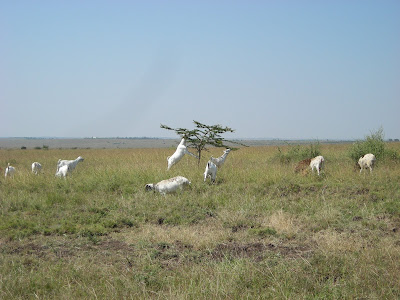 At our research station, I befriended one of the Maasai guards named Fred Kipoit, whose job was to protect our camp against rogue wildlife and rogue people. He did this with a machete, a wooden mace, and a high-powered flashlight. My encounters with him consisted of patrolling the perimeter with him at night, listening to stories of him battling lions, and as I'll detail here, butchering the goat for our team's final feast. This butchering occurred in the acacia forest behind our buildings, out of sight and hearing of all the students, the students who would later eat the product. 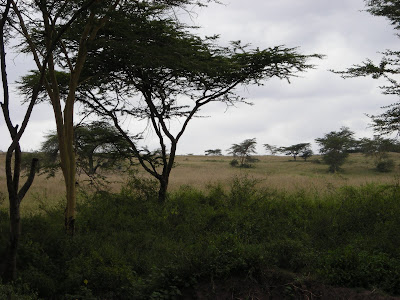 The experience was a fascinating one, both for the actions and the company. It was no ordinary butchering, it was a Maasai one... and what came with that was a wholly unique process... highlighted by their aversion to eyeballs. So. This shall be a sectional poem of sorts... though I dislike the word poem, so I'll chalk it up as Xtreme detail. Interspersed throughout will be photos and a video! yay, of the goings on.

The goat was strangled with a nylon cord
With no resistance. On the muddy path
That splits the bush, by an electric fence
Its body stiffened in a final gasp.

Fred Kipoit was hired as a guard
To peer into the night tar-skinned and slender,
He carries a thin rod made of tamarind
That I hold now as he collects the tinder.

A nesting pair of bare-faced go-away birds
Scold me like the bleating of a sheep,
I hollow out and rinse the ripped intestine
As the golden films of shit pile in a heap. 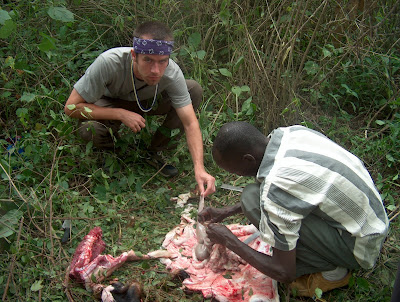 To pay respect for animals that die,
Plucked from cattle dips or subtle dens,
Custom of the Maasai is to spare
Their eyes from seeing juice upon our chin.

The knife dissevers membranes of white matter
Like the cells of a sweet grapefruit; at last
The eyes are torn, tossed onto the ground
Like bulbs uprooted, reddening the grass.

Stripped of skin and braced on wooden prongs
The muscles sear under a smoky hood
By orange gleams that quiver in the breeze
Of savannas lying far from coastal woods. 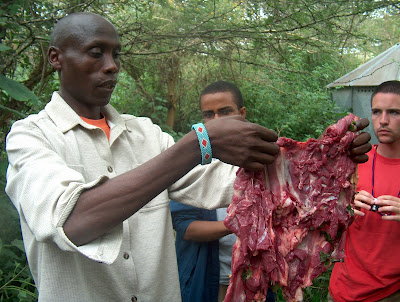 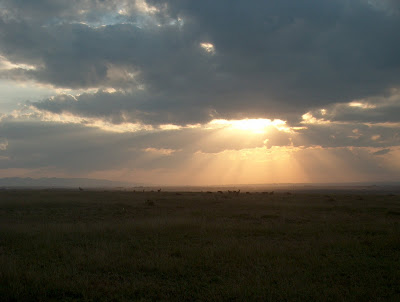 At 6:30 a.m. the phone calls start. I listen to and decline a few job offers, floating in and out of consciousness, lying on my stomach, the phone pressed between me and the mattress. Vibrate. Vibrate. I think back to the day before... impossibly small humans... asking me if if they can put their heads in the trashcan... tugging on my knee, asking Mr. Alan, can we use your shoes as pillows?

7:00. Another call. Awake. Middle school Math. I can do that. I get up, completely relying on routine and muscle memory to get me through the mindless morning sequence. Wash. Eat. Dress. Pack. Drive. Bump Drake.

I'm in the classroom.

The lesson plans are simple enough. Pass out a worksheet with some complex word problems on them, and do this for every class. One of the problems reads as such:

Oh my God. Talk about an obnoxious question. Now I have to listen to the sighs and complaints about it all day. I will have to continually threaten them by telling them that it will be collected and graded. By the way, the answer is 4.

But. Never despair. What I've learned as I trawl classroom after classroom in search of amusement is this: that the most priceless gems never have anything to do with the schoolwork. Today's no different. Here are the highlights:

One extremely "enthusiastic" boy feels the need to share all of his favorite jokes with me.

Him: Did you hear the joke about the speeding bullet train?

Him: Too bad. You missed it!

Him: What's the difference between Jimmy and an onion?

Him: You don't cry when you chop Jimmy up.

He keeps on going. And going. Wow. But I get distracted by a little girl who is bragging to her neighbor that she can burp the ABC's. So cliche, I think. But then again, she is about 40 pounds so I have to see if it is true. I put her to the test. She then gets red in the face and says she can't do it all at once. I have called her bluff. I turn my back on her and start heading back to my desk. But then, from behind me, from deep down in her recesses, comes the eruption. A. B. C. D. I stay completely still so as not to distract her...all the way until X. Y. Z.

Completely enthused with my first class, I think the day can't get much better. That is until a shaking young lad comes up to me and says someone is threatening to kill him. Mhmmm.... Unexpected!!! I stay calm and ask him: Who? How do you know?

He hands me a folded piece of paper. He tells me he found it in his locker. 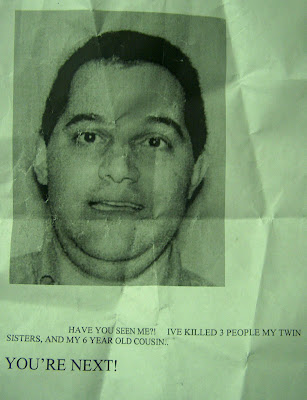 I can't tell whether he is actually frightened by this or not. Either he is an excellent actor or he is petrified. Regardless, I tell him that there is nothing to worry about. That I will take care of it. That he is safe. Lolololol.

The rest of the day passes by calmly. A new kid comes and eats lunch in my classroom. We debate his homework, and whether 4 never-ending lines can have only 2 points of intersection.

After lunch, I give the class a challenge. The kid who answers the domino riddle first wins a prize. This is the riddle: 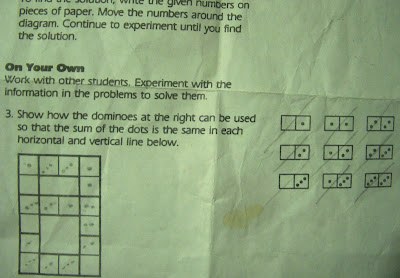 So far, no one in any of the classes had answered it correctly - a perfect opportunity for some excitement. And...?

I tell her to dispose of the can afterward, for I'm sure that it is against school policy to down soft drinks in class. She says NO. I'M KEEPING IT AS A MEMENTO. I say whatever.
Posted by SilentK at 3:14 PM 1 comment: