skip to main | skip to sidebar

In a movie with transcendent dino stars, Jeff Goldblum found a way to outdo them all. How did he do this? One by a being a terrific actor, two by getting to play the best character of all time, Dr. Ian Malcolm.

For all you out there who spend the entirety of Jurassic Park ogling at T-Rex and Velociraptors going "wow" and "neat," you probably can't remember a single line he said. And granted, I saw it about 150 times before I did either... but eventually I dug deeper.

And if you dig deeper, if you actually listen to what is going on, you will find the deepest proddings of the world's psyche ever to hit the big screen. And what is the purpose behind that deepest prodding? It is to massage out the potential results of unconsidered biological tinkering, just like Mary Shelley's Frankenstein. I am not lying. Let us dig deeper together:

First of all, everyone's memory needs to be jogged with an image of Ian Malcolm, the man himself, the muse that brings the philosophies to light: Who is Ian Malcolm?
Physically, as you can see, he is tall, lean, and about 35 years old. He is a mathematician that specializes in chaos theory, and he is also the namesake of the fictional Malcolm Effect(which describes the catastrophic rapid failing of a solar system).

Anyways, Malcolm predicts from the very beginning of Jurassic Park that the park will fail. His reasoning behind this prediction is that complex systems cannot be controlled. One example he uses is weather forecasting which is performed by computer programs.

Believe it or not, his theory is proved correct. The dinosaur population of Jurassic Park was designed to be controlled by having all the dinosaurs be genetically engineered to be female. Thus, no breeding possible. And no breeding is good breeding, because otherwise all hell would break loose. However, during the film, Dr. Alan Grant discovers the nest of a Velociraptor filled with hatched eggs. As said by Malcolm, life finds a way. Don't try to control it. His theory is proven further in the eventual escape of every dinosaur in the park.

Now that you've got a general idea of who he is, we'll get to the funnest part. Exploring his wonderful character through the things he says: 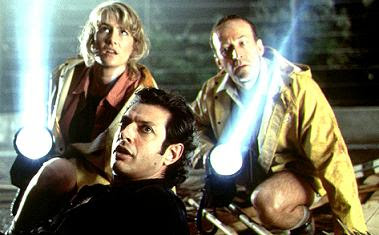 God: Bow to the awesome power.

More than anything, Ian Malcolm challenges us to think. He challenges us to resist the initial lust of discovery in favor of the more cautious approach. Why be cautious? Because anything can and will happen, when given the ingredients.

Just like when you get a bowl, put in some Jeff Goldblum, a pinch of chaos, and a dollop of butter, only to mix it all up. Then you wind up with this on your bathroom wall: 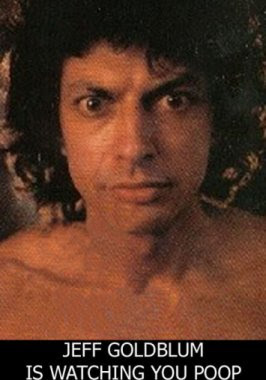 The Art of Idleness: Substitution

There is a certain substituting rhythm that I have adapted myself to. The average class requires very little student interaction. The goal is to go by unnoticed, the dream being that the students will function as a separate entity, not needing the inspiration of a teacher.

Thankfully, most of the time I "teach" I encounter the brightest stars of the Chapel Hill-Carrboro City School constellation, which allows me to do whatever I want. I drop the bad news to the kids: do this worksheet, then this one, then shut up, and they accept it.

My latest assignment was middle school math. For the first half of the day I was in a surly mood; the kids were not paying attention to me. So I quickly changed up my style and began to threaten them. All of the kids were supposed to be working on EOG worksheets, but there was a group of three boys that refused to do so. I had learned earlier that the ultimate punishment in middle-school world is to send the kid to the teacher break room, where they must do their work in dead silence and isolation.

I walked up to the three chumps and knelt down in front of them and laid out the law:

"Look. I'm not blind. Just because you have the worksheet in front of you doesn't mean you are working. You are over here slapping each other and smashing staplers on the floor. You are disrupting the kids who actually want to learn something. If I hear anything else you are going to the break room. Capiche?"

This made them shut up, and for the rest of the day this is what I did, making an example of one kid at the beginning of the class and then sitting back to relax and let them grovel and learn.

In the meantime I had discovered a tragedy of my own. There was no internet. What the heck was I to do? So Bored. Thankfully I brought Jurassic Park with me, so during my break periods I watched it. Get ready for an upcoming post about Jurassic Park. I've got Jeff Goldblum thoughts.

But my true-found entertainment came while scrumming through the "art & crafts" drawer. Here I found a watercolor kit!!! So for my last two class periods I spent my time painting, filling all the students around me with jealousy and fascination.

Here is my end product: 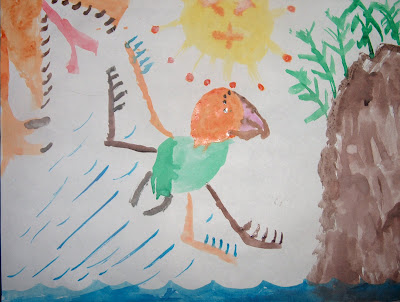 Yeah I know. You might be wondering if that really took 2 periods to paint? The answer to that is No, it didn't. But that's beside the point. It all began with the creature in the middle. I think the arms may have been inspired by my mantids lethal forearms, the head inspired by a parrot, and the rest of the body by a grotesque spider abdomen. Then I just felt that he needed to be soaring out of the water, heading towards an exotic island.

Then one of my admiring students said I needed a dragon. After half-heartedly rebuking them for watching me paint instead of working, I opened up discussion of dragons. I could not really see it happening in this painting, but I added some version of a dragon anyways, just to please the masses. I think the "dragon" is really scaring my mantid-fish-parrot, making him flee into the dense brush of the island. Meanwhile, the sadistic, all-powerful Sun God is watching, pleased with the havoc his world is wreaking.

While I was doing this I was, of course, washing off my brush in a bottle of water. The water by the end was a dark mess, the color of forest-green sweaters in L.L. Bean magazines. I half jokingly offered to pay someone 10 dollars to drink it. Much to my dismay, about 5 kids leapt up to battle for the opportunity. I was part disgusted, part impressed. I wound up backpeddling and not allowing anyone to, saying that I wanted it for myself. I couldn't stand for poisoning my children!!!!

Finding entertainment without internet is So Challenging. But for all those out there who feel helpless when denied the .com world, don't despair. Just think. Last week I subbed for a elementary music class, and for 7 hours all I had to do was teach two 30 minute classes of kindergarten kids. I played them a Carnival of Animals video during class, and for the other 6 hours I locked myself in and banged on the piano and tooted on the recorders. I learned how to play Amazing Grace on both. And since all four walls of the classroom were made of mirrors, I practiced all the dances I had forgotten how to do. I danced the Rumba with my reflection. I ate my lentil leftovers. I GOT PAID.
Posted by SilentK at 2:12 PM 3 comments:

I am substituting for high-school Ceramics class and am entirely unneeded. Straight from the horses mouth I was told: The reason you are required to be in here is so that someone can be liable for the children, which in real-talk equates to: if one of them burns their hand off they can blame it on me. Ha! Like I know to work a kiln...

So anyways, I have plenty of time on my hands and feel that it is time to provide you guys with a new form of entertainment. This game is about as simple as it comes and will be sure to "shock and wow" you. What else could you possibly want?

What you need:
a.) google
b.) dissociative skills

The first thing you need to do is to turn off the safe search on your Google Image Search. I hope that most of you would already have your computer set like this, but I have come understand that there are some out there who avoid the dark side.

The second thing that you need to do is to make a list of 4 words. The key is to pick 4 words that are the least associated with each other. For example, don't have one of your words be "swine," and then have another one be "bacon." Instead, do something like: "swine and carpet."

Once you have selected your four words, enter them into the Google Image Search. Now, find out what pictures you come up with! The only guaranteed result is amusement. Every other result is up to the Gods.

Here are a few examples of what can surface: 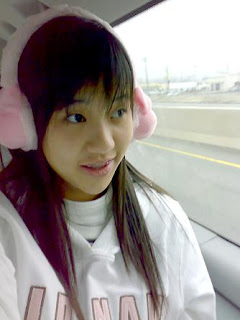 It's difficult not to keep going and going, but I'll stop there. I don't want you to get fat and happy off of my hard work. So go do it for yourself!
Posted by SilentK at 10:53 AM 1 comment: